Who do you say that I am?

Know the time, the culture, what is happening and the landscape of what you are reading in the Bible.  Especially where Jesus talked because He often used the context of where He was or what He was doing to communicate a point.

This has been said to me over and over by Bible teachers. Often times the dimensions were easy to piece together but other times it left my mind with a giant “HUH?” I don’t know if you ever did but I would often think well that was random.  Why did Jesus say that and why that way?

As I traveled through this chosen country many of the accounts in the Bible became clearer. Especially the account of the conversation with his disciples in Matthew 16:13-20.  In the area of Caesarea Philippi, --sorry got to take a side note here--
I was told that I pronounced this region incorrectly; see if you do as well.  I would pronounce it as “Cess-a-rea”.  BUT the guide quickly informed me that Rome never had a Cesser they had a Caesar and it should be pronounced Caesar- rea.  Oh please don’t tell me I am the only one that mispronounced that all my life.

Anyway back to the region of Caesarea Philippi.  This is in the northern area in Israel and was filled with pagan worship.  A search into the Old Testament shows where a king brought pagan worship to the area and it was never fully demolished.

As we exited our chariot, named by our guide but it was actually a people mover bus, we walked past a few relics of the time then found ourselves face to face with a rocky bluff.  Scattered on the face of the bluff were carved niches for idols of many kinds, ruins of temples to little “g” gods like Pan and even a bottomless pit for sacrifices. 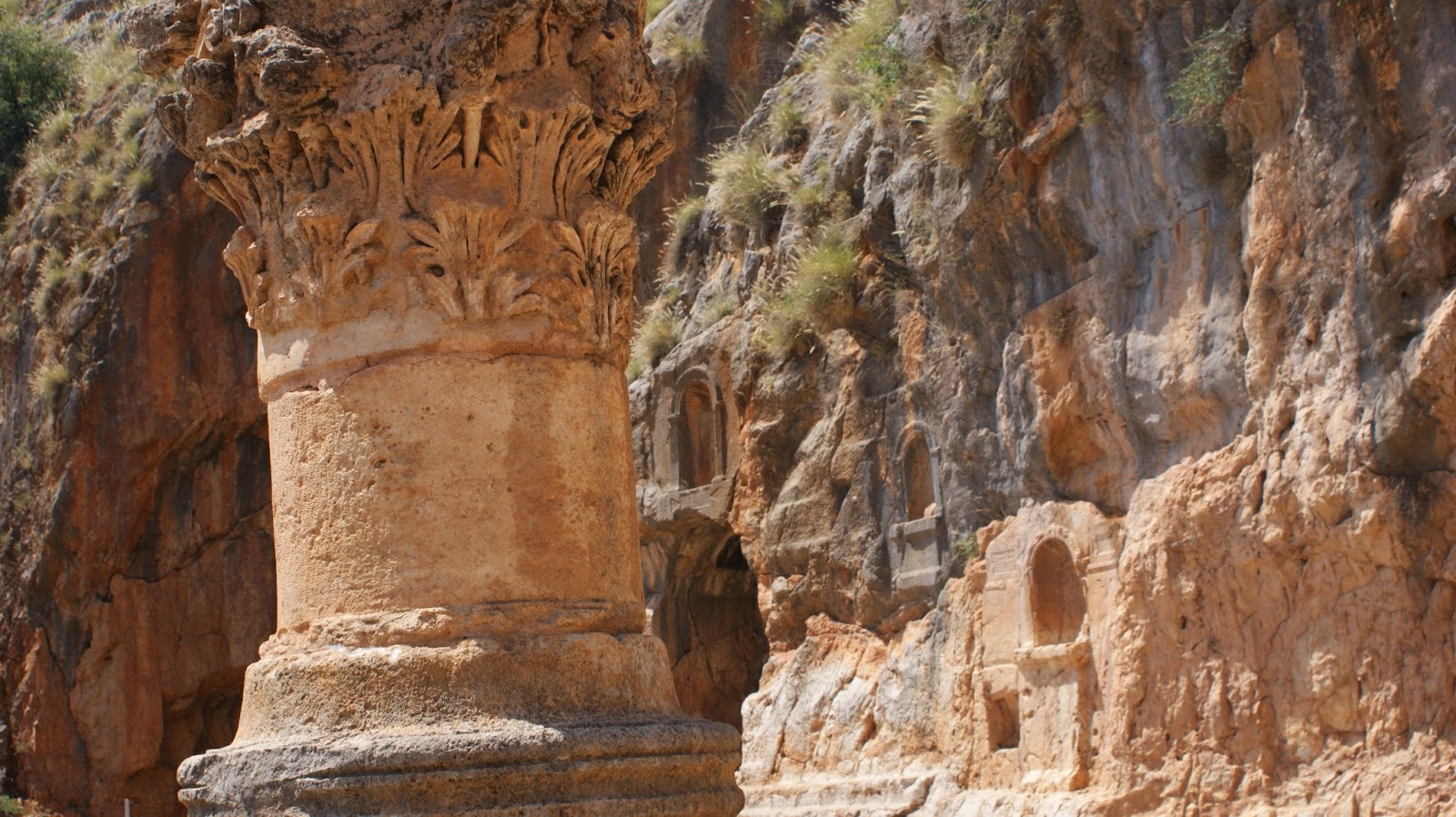 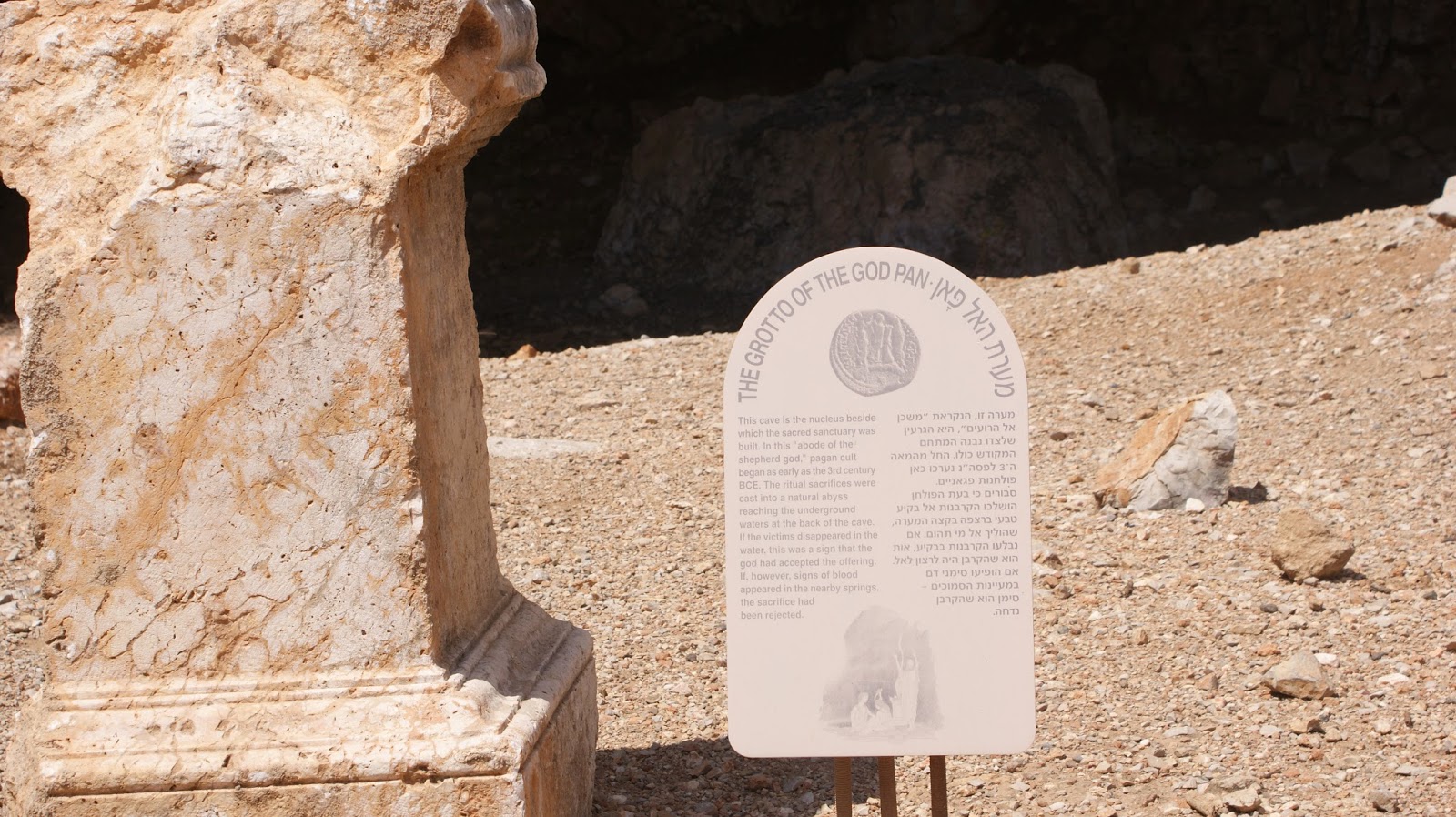 So in this passage in Matthew, Jesus is walking through the region with his disciples who couldn’t help but observe all the influence of the pagan worship.  Maybe He saw them walking through the area with their eyes wide open and mouths agape like mine were on that day.  Maybe He observed the clicks of the cameras of their eyes snapping images left and right much like my camera shutter was doing.

As Jesus observed them He asked a couple of questions.

These questions are relevant just as much today as they were when Jesus originally asked them.

Many people today still believe he was a prophet, a good teacher and some even think he was a liar or crazy man.

But the question still remains for you…Who do you say He is?

Does the things surround your life sway your opinion?

If Jesus asked you today what would you answer? Who do you say that He is?
Posted by Cynthia at 12:30 AM No comments:

Email ThisBlogThis!Share to TwitterShare to FacebookShare to Pinterest
Labels: Caesarea Philippi, Holy Land, idols, Who do you say I am?

How could they not see?

Stony ruins lay just beyond the trees providing shade.  Here a house, a mitzvah (ceremonial bath), a partial synagogue now only provided a residence for rock hyrax.  Excavations show that this once was a vibrant town that inhabited many people.  But what happened?  Where did the people go? 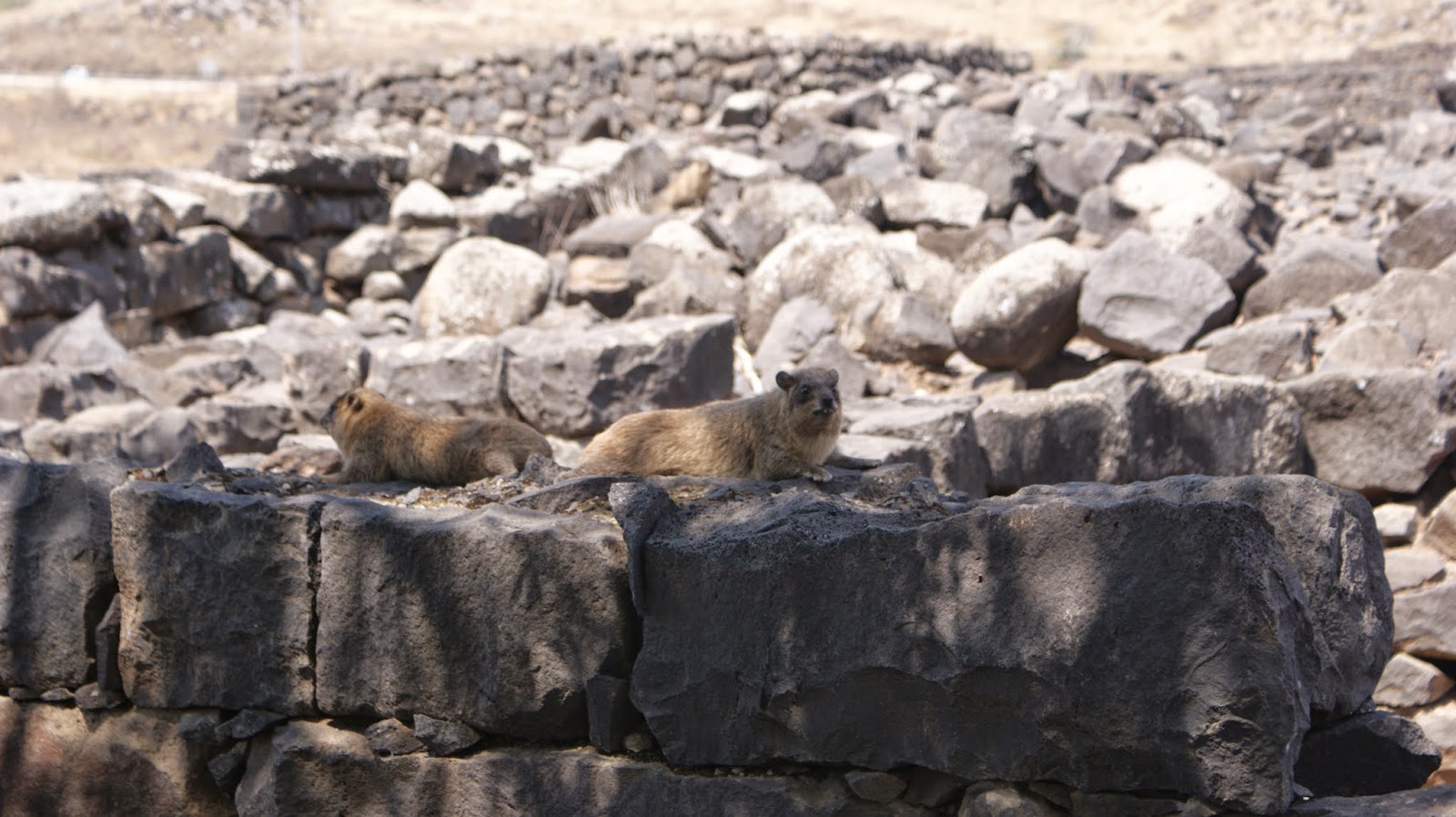 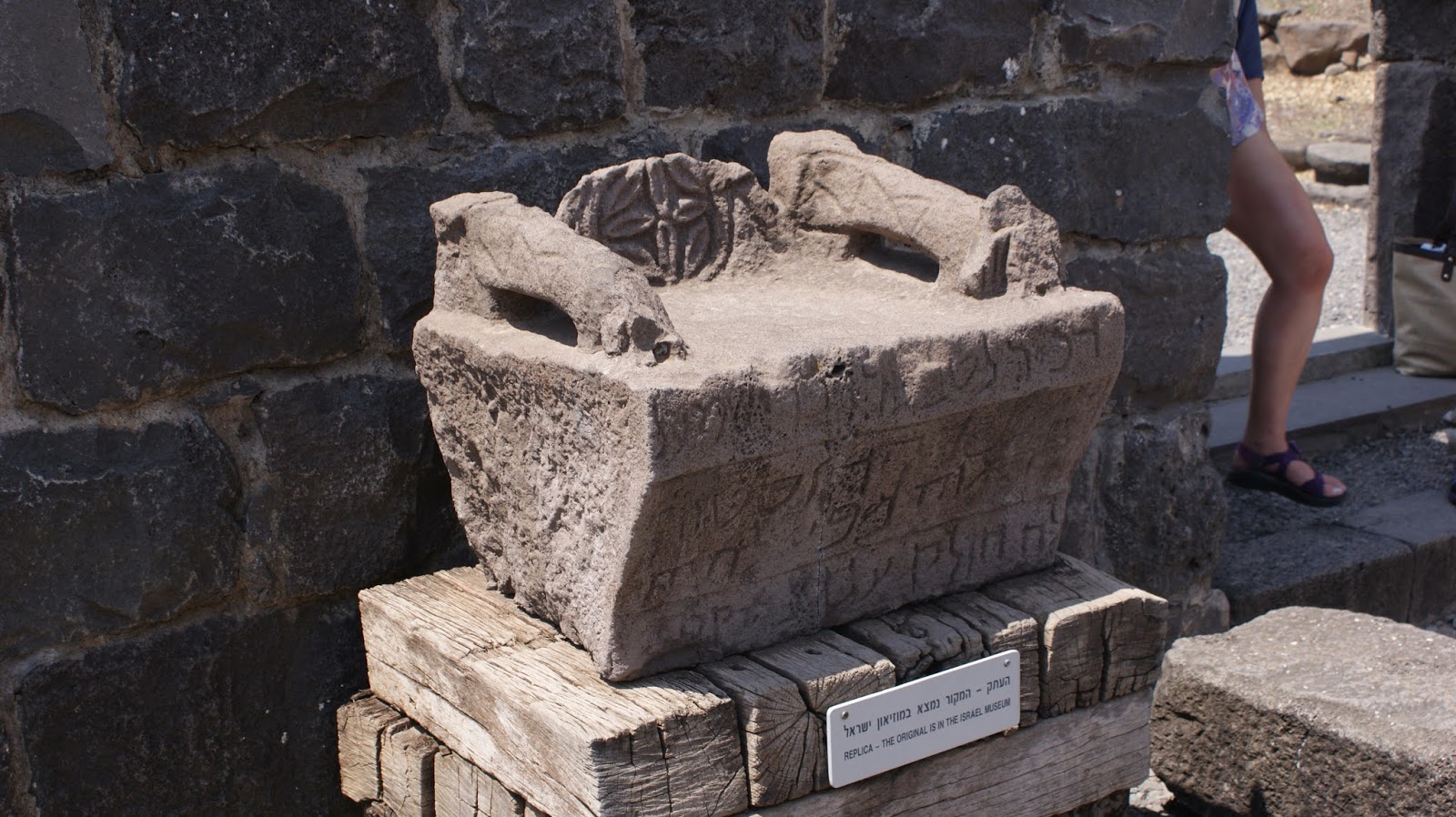 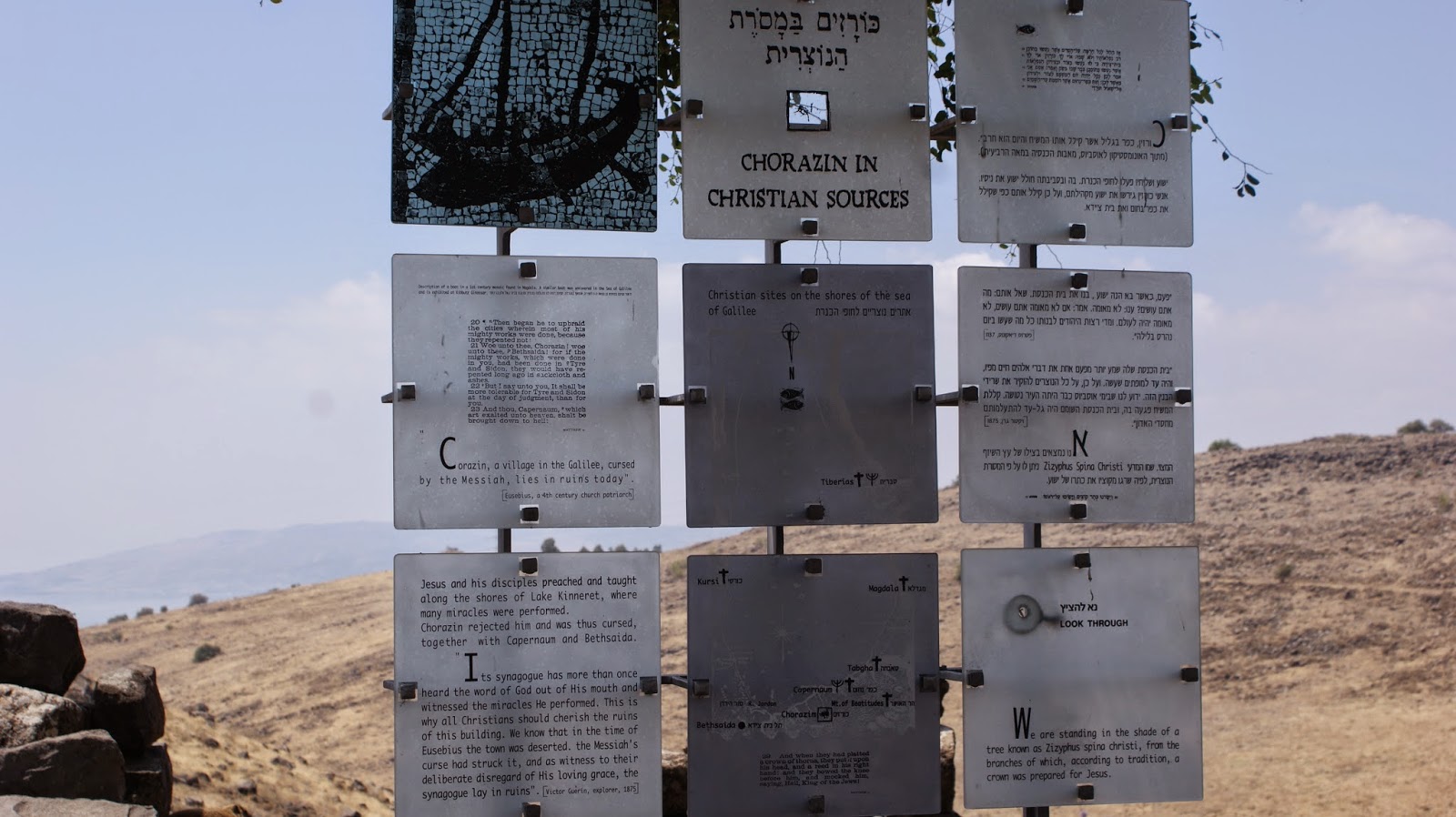 Matthew 11:20-28 gives us insight to the fate of this town because where I was standing was in the center of Korazin, a town denounced by Jesus.  Jesus had once walked the stony paths that wound around these ruins long ago.  The people there had seen the miracles that He performed but they stubbornly refused to repent from their sins.  They saw but didn’t believe therefore suffered a greater punishment than the wicked cities of Tyre and Sodom. (Cities that didn’t see Jesus.)

As my eyes traced the outlines of the former buildings my thoughts wandered back to the plane ride to this country.  The woman sitting next to me was an Israeli. As she inquired about why I was on the long plane ride she said: “oh you are going to walk where that Jesus walked.  He was only a good teacher but the Son of God?  No” As I sat there before my feet ever hit the soil of the Promised Land, I wondered: “How, how could you be from this place and be blind of who He is?”

The voice of our guide snapped my thoughts back and as he quoted scripture. Here I stood seeing the verses come to life into a real space.  How could they have had Jesus walk among them and not see nor know?
Then it was like Jesus whispered to my soul…”And you? How many times have you been blind to what I was doing?  There were times when I worked something out right in front of you, times when through my handiwork I orchestrated events that none other could have done but yet you were blind to me as well.” Yes I, too, was guilty of being blind.

God hides things from those wise and clever in their own regards BUT He reveals to those that are childlike.

One of my favorite verses is Proverbs 3:5-6 “Trust in the Lord with all your heart and lean not unto your own understanding. In all your ways acknowledge Him and He will direct your path.”

Are you being wise and clever in your understanding of things going on around you? Or are you leaning with childlike faith into the One who walks among you?

Even if you think you are walking along your own stony path with ruins on each side, Jesus is there working. Don’t be blind but look around and pray that you will see!

Open the eyes of our hearts Lord, that we may see Him!
Posted by Cynthia at 12:30 AM No comments:

“THE LAND is the fifth Gospel,” wrote Cyril of Jerusalem in 348 AD. “After one has seen the old cities and landscapes,” wrote St. Jerome a century later, “one reads the Bible with different eye.”

Those statements ring so true.  After walking where Jesus walked, gazing upon the Land of Milk and Honey and experiencing a pilgrimage of a lifetime, I WILL NEVER READ THE BIBLE THE SAME WAY AGAIN! The Bible leapt from the page and became a visual in my mind forevermore.

The first four books of the New Testament that declares the good news and tell the accounts of Jesus’ life and ministry as He walked this earth as God-head in bodily form.  I have read these but I never thought or even considered a fifth gospel.  When our guide asked us what the fifth gospel was, I could sense the muscles in my face contort and my eyes squint with questions forming.  I think he saw it too.

Fifth gospel?  Well that’s a new one on me.  So our guide explained, “These lands, ruins and cities will declare the good news and testify of Jesus as you travel your way through it.”  This country that takes 14 seconds to fly across the width and 45 minutes to fly the length is a slice of tranquility surrounded by chaos (well until recent days) that cries out about The One that came before and those that paved the path and those that walked with and served him.

Our guide was correct! 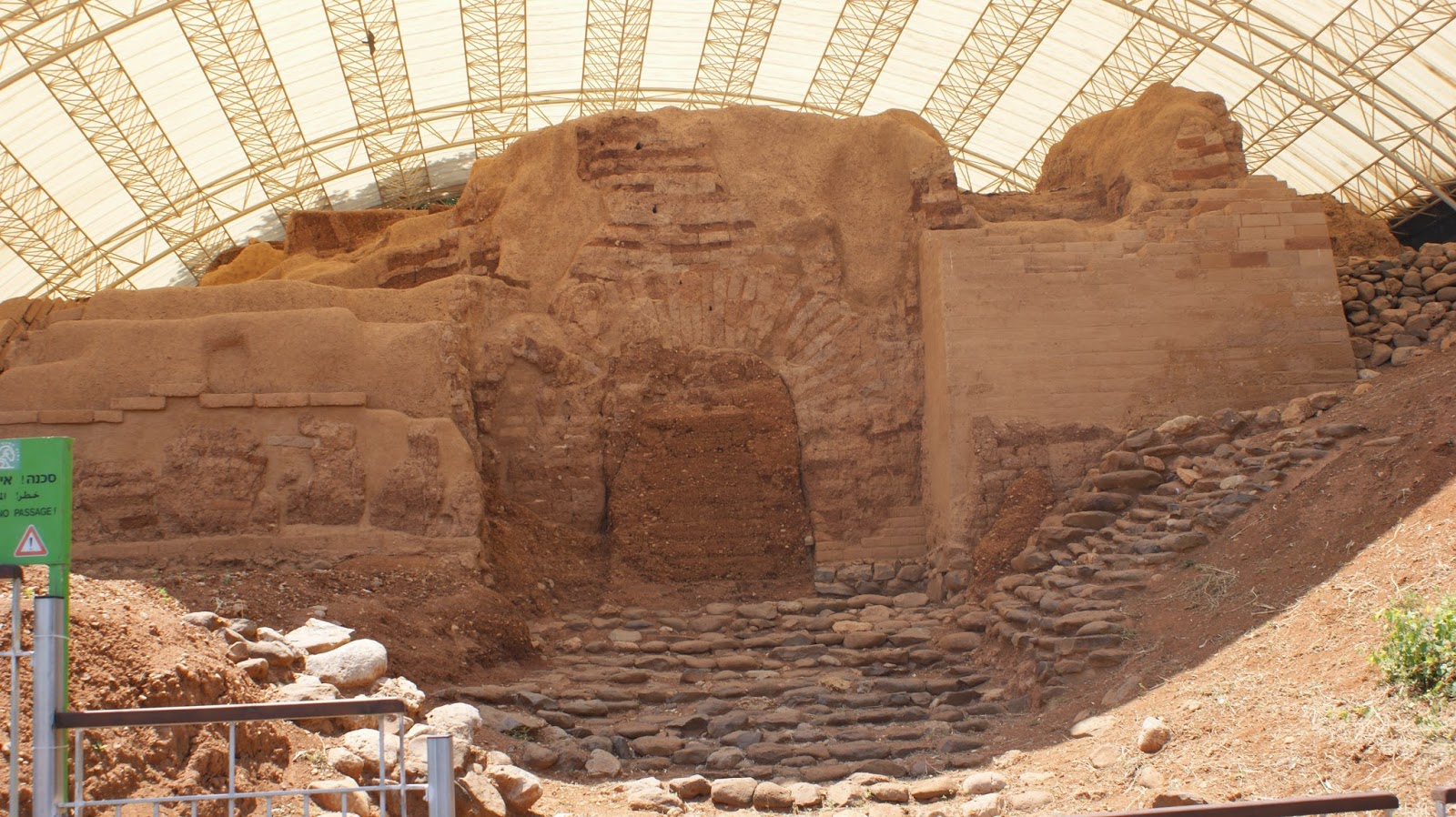 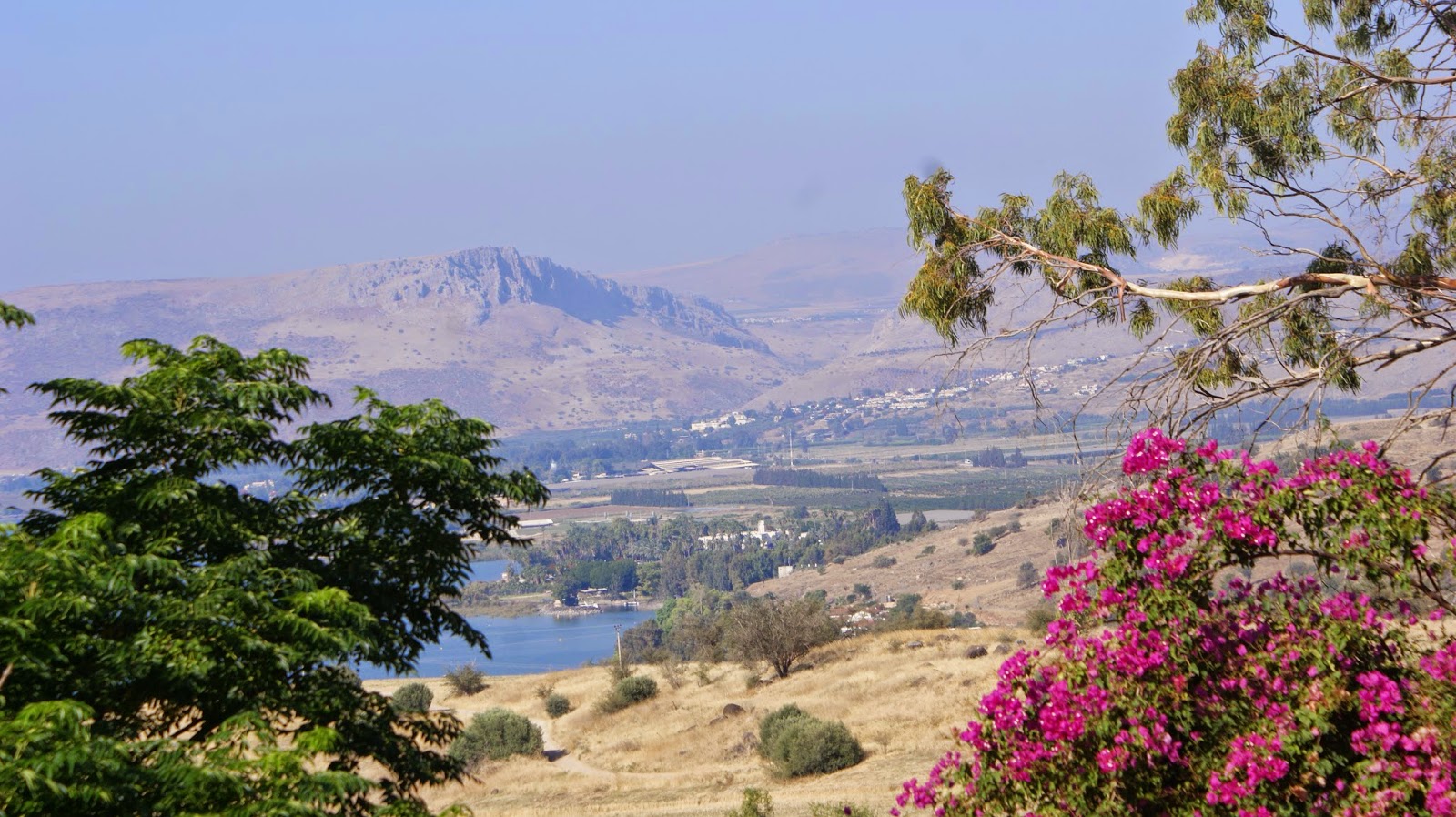 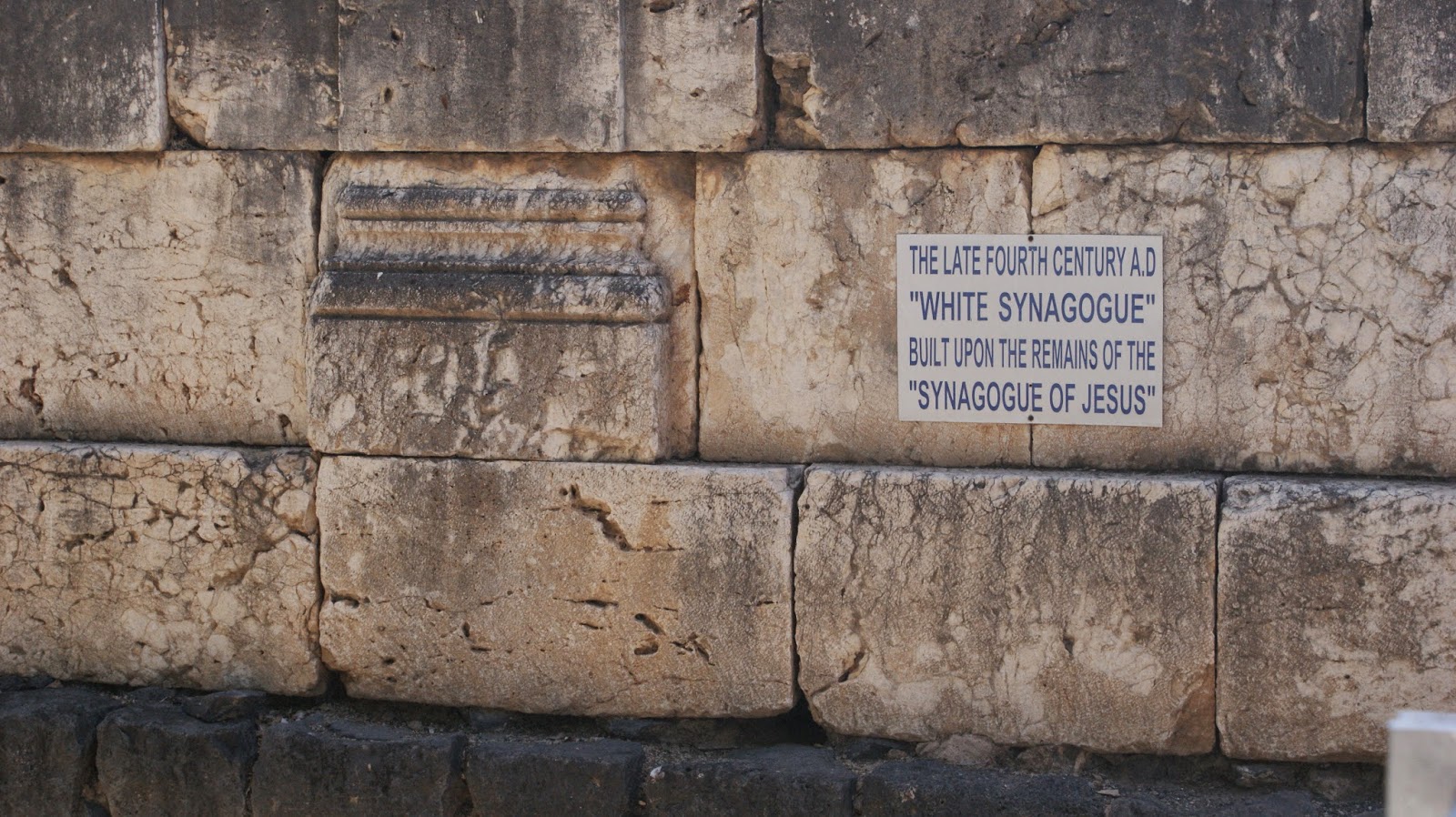 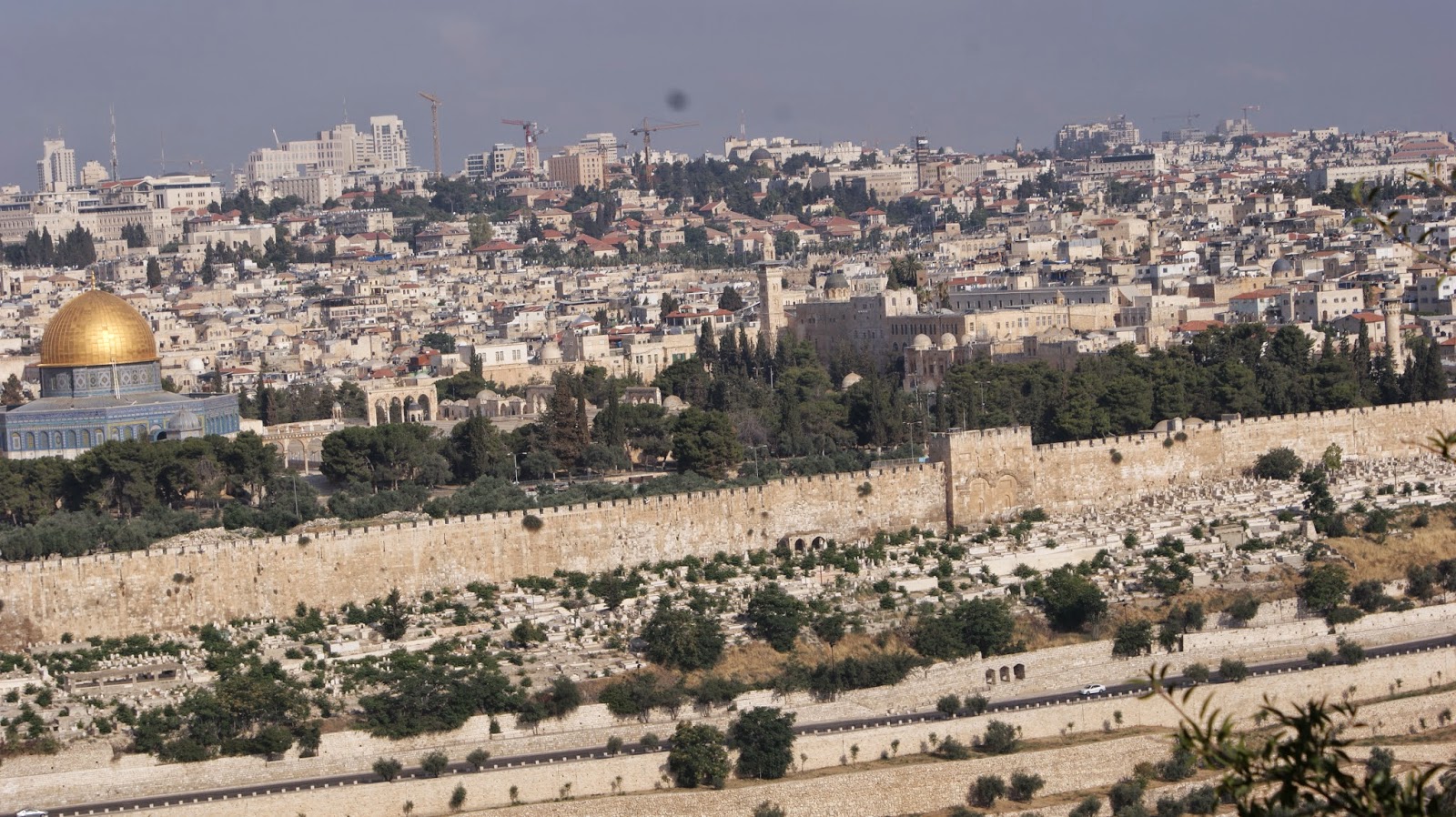 The Sea of Galilee, Capernum, Mt. Carmel, Nazareth, Bethlehem and so many more shouted the authenticity of the Bible. My  favorite?  Well to begin with you are asking a gal that has trouble deciding what to eat when given the opportunity to go out, so of course the answer is ALL of THEM!!!!

Over the next few Tuesdays I will try to give you a glimpse of the land that declares The Light of the World.  That’s if I can narrow it down and not write a novel each day. J

But before we get started may I ask you…Are you maybe the Sixth gospel?  I have often heard that sometimes we are the only gospel that people read.

Luke 19:37-40, “Then, as He was now drawing near the descent of the Mount of Olives, the whole multitude of the disciples began to rejoice and praise God with a loud voice for all the mighty works they had seen, saying: “Blessed is the King who comes in the name of the Lord! Peace in heaven and glory in the highest!”  and some of the Pharisees called to Him from the crowd, “Teacher, rebuke Your disciples.” But He answered and said to them, “I tell you that if these should keep silent, the stones would immediately cry out.”

Are you declaring The One and Only with your actions before others? How are you displaying Him for others?  Don’t keep silent we don’t want rocks shouting louder than us!
Posted by Cynthia at 12:30 AM No comments:

Email ThisBlogThis!Share to TwitterShare to FacebookShare to Pinterest
Labels: Holy Land, Land of Milk and Honey, The Fifth Gospel

Can't wait to share my summer adventure with you!!!!
Posted by Cynthia at 1:11 PM No comments: